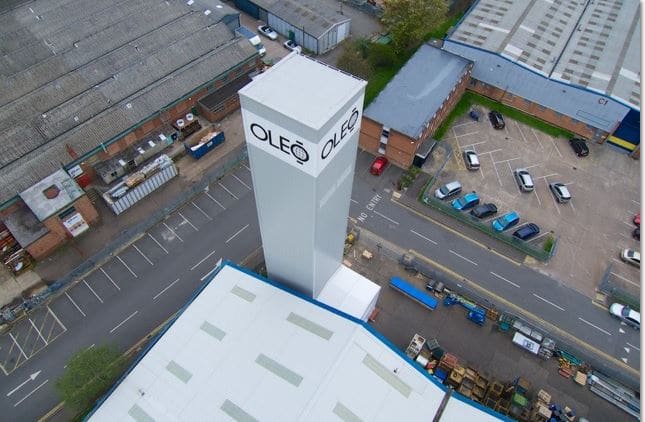 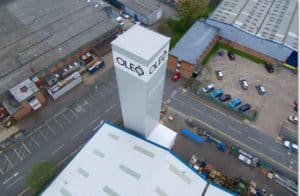 Ecl-ips has been recognised for its part in the filming of the world’s tallest elevator buffer testing tower constructed by Oleo at its headquarters in Coventry. The project was widely covered in media outlets: The Manufacturer, ADS Advance magazine, Worcester News, Bromsgrove Advertiser, Midlands Business News and PSI Magazine.

The 32 metre tower allows the company to conduct tests on buffers designed for the high speed elevators installed in the world’s tallest buildings. Elevator buffers sit at the bottom of an elevator shaft and are a vital last safety mechanism in the unlikely event that all other safety mechanisms fail. They work by absorbing the impact of the free falling elevator, saving the lives of the elevator’s occupants. The tower has already enabled Oleo to manufacture the world’s largest hydraulic elevator buffer. At 15 metres tall, the buffer can absorb the impact of an elevator travelling at 20 metres per second.

Recognising the testing tower was an industry first, Oleo’s Marketing Manager Sandy Andringa wanted to record its construction to use in marketing activity. She commissioned freelance film maker Paul Duffy of Diamond Ocean, who had worked with the company previously, to investigate camera solutions. Paul had a very clear brief: he was looking for a camera that could be used in two distinct ways. Firstly, a fully weatherproofed camera needed to be installed externally to produce footage that could be used in a time lapse film showing the tower’s construction.

Secondly, once construction was finished, that camera, along with two additional cameras, needed to be installed inside the tower so they could be used in a testing capacity. This would enable Oleo’s technical team to examine each elevator buffer test and, in the case of a problem, pinpoint exactly when it occurred and have access to valuable data to help solve it.

Once Ecl-ips had been contracted by Oleo, Ecl-ips’s technical team and Paul carried out camera and software tests to ensure the hoped-for results could be achieved. In the end, a 5MP camera was selected. This was mounted vertically and precisely positioned to give the best possible view of the entire construction site.

Paul was delighted with the attitude of the Ecl-ips engineer on site. “He demonstrated an ability to overcome challenges successfully and was clearly very engaged with the project and its unique elements, which made the process so much easier.”

Once the camera had been deployed, Paul downloaded the images from the camera every 24 hours. He supplemented the footage with footage from additional mobile cameras when other views were required and used them to create a time lapse film of the entire process.

If you have a challenging film project for Ecl-ips please get in touch. 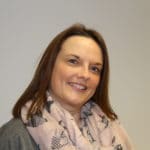