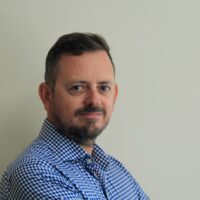 This product is no longer available and we would recommend
you take a look at its replacements either APC Netbotz 250 or the APC Netbotz 750.

What’s in the box?

Find out more about our real-time monitoring solutions

The APC NetBotz Rack Monitor 570 (NBRK0570) is an enterprise appliance for environmental monitoring and control within IT rooms, Server Rooms and Data Centres.

A NetBotz 570 protects your computing equipment from physical threats such as high temperature, humidity, water damage and also both malicious and unintentional access events. This device supports NetBotz wireless sensors, the NetBotz 570 is a rapidly deployable device to add to your environmental monitoring solution.

The rack-mountable form factor means that the NetBotz 570 can be mounted in a rack alongside your other IT equipment or zero-U mounted in the rear of a cabinet. The appliance has 6 on-board sensor ports for NetBotz wired sensors, including temperature, temp/humidity, smoke and spot fluid sensors as well as third-party sensors via a dry contact cable. Additional ports include a beacon, voltage output, relay output and Modbus connections for monitoring over Modbus RTU or TCP.

The APC NetBotz Rack Monitor 570 (NBRK0570) functions as the central hardware appliance for a NetBotz security and environmental monitoring system. The rack-mountable appliance includes multiple ports for connecting APC environmental sensors and other third-party sensors. The appliance includes additional ports that provide power to or allow control over other devices. Supports up to 4 external camera pods, 12 sensor pods and up to 78 Universal Sensors.

Find out more about the benefits of the Netbotz 570

What's in the box? 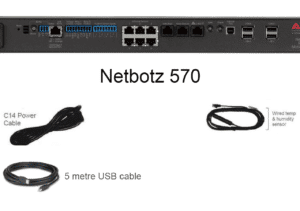 How many sensors can I have?

There are 12 sensor pods and you can connect up to 78 Universal Sensors.

Can you connect cameras to the Netbotz 570?

Which organisations will benefit from Netbotz monitoring?

Netbotz monitoring will benefit organisations in the education, finance, healthcare, banking and insurance sectors as well as businesses with multiple branches such as pharmacies that may have one remote IT team. Ecl-ips has been involved in providing Netbotz systems for several companies including AON, the BBC, Network Rail, the London Underground, Birmingham City Council, JLT, Wychavon District Council and BT.

What is the history of the Netbotz appliances?

Who owns the Netbotz-branded appliances now?

What was different about Netbotz products when they originally came to the UK?

Aaron Kernaghan, Managing Director of Ecl-ips, has been designing and installing Netbotz solutions in the UK and Europe since 2003 when the company had received funding to expand to worldwide markets. While there were other monitoring devices being developed the Netbotz appliance was the only one that incorporated a camera. Aaron said the camera was a unique selling point as two-thirds of IT outages have been found to be due to human error so knowing who has entered the IT or Server room is vital.

At that time companies had very little awareness of the need to monitor comms and server rooms and servers were literally overheating. However, Aaron said there is now more awareness about the need for monitoring critical IT spaces that now incorporate Edge spaces with PoE equipment.

Originally Aaron said they competed with rival firm American Power Conversion (APC) and frequently won business ahead of them. NetBotz was the winner of the Computerworld Network Award 2004 for “Most Innovative Use of Technology”.

Why should I choose a Netbotz appliance for real-time monitoring?

Aaron says the APC Netbotz monitoring appliances offer the most flexibility of all of the monitoring products, the alerting mechanism can be escalated in various ways. You can use it to monitor third party devices such as air conditioning units, UPS devices, tank flow levels, leak detention and many other third-party sensors.

Have you enjoyed this product? Leave feedback for Ecl-ips on SayHola 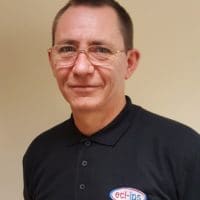